The AEC is aware of action recently taken by the Australian Federal Police in relation to a series of spam emails circulated regarding the Eden-Monaro by-election.

The AEC takes this matter, and all electoral integrity matters, very seriously. The AEC initially referred the matter to the Electoral Integrity Assurance Taskforce for consideration on 10 June 2020 and has continued to provide evidence to support the investigation.

The Australian Federal Police – a member of the Taskforce – is the lead agency on this matter and the AEC will not be providing any further comment.

The Electoral Integrity Assurance Taskforce is a network of Federal Government agencies that provide guidance and expertise on a broad range of issues within the Australian electoral environment. 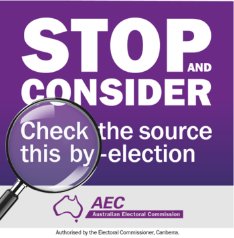 The AEC has been running a social media advertising campaign in the division of Eden-Monaro branded ‘Stop and Consider’.

This campaign, which was also conducted for the 2019 Federal Election, is to remind Eden-Monaro voters of the importance of considering the source of electoral information.

Email your media enquiry to the AEC Media Unit at media@aec.gov.au.