The AEC developed and conducted an extensive public information campaign for the 1999 referendum. The aims of the campaign were to ensure all eligible electors were informed and understood what was required of them to fully participate in the referendum and to advise them of the range of services to which they had access.

The major messages conveyed in the campaign were:

The public information campaign involved a number of components including advertising, public relations, publications, national telephone enquiry service, the internet and education activities. There were also a number of specific activities directed at the key target groups of electors from non-English speaking backgrounds, Aboriginal and Torres Strait Islander electors and electors with a disability.

The national advertising campaign was divided into three main phases: encouraging enrolment; explaining voting services; and explaining how to vote formally. In addition, there were press advertisements placed to promote the delivery of the Yes/No case pamphlet.

The campaign was based around the key message of 'Yes/No'. As it had been 11 years since the last federal referendum, the campaign used every opportunity to reinforce to electors the importance of these two words when marking their ballot papers on polling day. 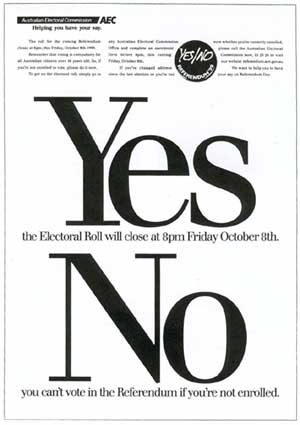 Of the total media budget, 51.5 per cent was spent on television, 16 per cent on radio and 32.5 per cent on press advertising. Expenditure in ethnic and indigenous media accounted for approximately 8.6 per cent of media placement costs. 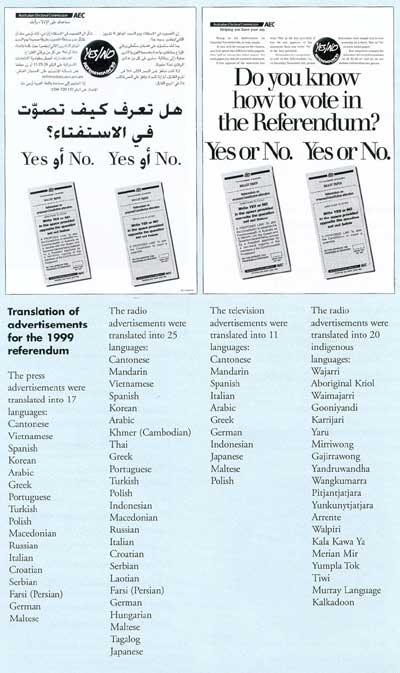 The State and Territory based advertising was designed to support the national advertising by providing key local information.

The advertising informed electors of the details of pre-poll and mobile polling and listed the polling places for polling day. The advertisements were placed in State and Territory, regional and local newspapers.

The 1999 referendum public relations campaign, which cost over $223 000, included the following activities:

Media interviews: AEC officers were interviewed on national, metropolitan, regional, community and ethnic radio and television throughout the referendum period.

Media briefings: information briefings for the media were held by several AEOs in their State or Territory during the referendum.

The following publications were produced for the 1999 referendum:

Production of the pamphlet

A total of 12.9 million pamphlets were produced, making it the largest single print job and largest single mail out ever undertaken in Australia. Due to the size of the project, the AEC worked with two major printing companies, a mail house and Australia Post to successfully complete the massive task in the short timeframe available.

Delivery of the pamphlets commenced on 27 September 1999 and was completed by 22 October 1999. This gave electors at least a fortnight in which to consider the various arguments before they went to vote on polling day, as required by referendum legislation.

Key information in the elector pamphlet was also provided on audio cassette, ASCII computer disc, braille and large print to assist electors with a print disability.

The pamphlet was also available from 20 September 1999 on the AEC's website in English and in an additional 14 languages.

Contents of the pamphlet

The 72-page Yes/No case pamphlet contained the arguments for and against the two proposed constitutional changes and a complete copy of the Australian Constitution showing the proposed amendments.

The Yes and No cases were required by law to be given to the Electoral Commissioner within four weeks after the passage of the Bills. For the 1999 referendum, the cases had to be received by 9 September 1999. The arguments were printed as provided by the parliamentarians.

The AEC has operated a national telephone enquiry service for all major electoral events since the 1996 federal election. The service, consisting of dedicated call centres, was established to assist AEC divisional offices to answer the large increase of telephone calls made to the national '13 23 26' number during an electoral event.

For the 1999 referendum, the national telephone enquiry service operated from 13 September 1999 to 12 November 1999 to provide information and assistance to electors. The service operated from 8am to 6pm weekdays and until 8pm on certain key dates including the week before close of rolls and the week before polling day. The service was also open on every weekend during this period.

The national service consisted of a call centre in each State and Territory capital city, with up to 170 trained telephone operators answering calls at any time. Callers would first be connected to their State or Territory call centre but, if all those lines were busy, the overflow was diverted to the national centre in Canberra. The eight integrated call centres answered a total of 447 344 calls over the operating period.

An electronic interactive desktop information system was used by all the call centres to ensure that all enquiries were answered promptly, accurately and consistently. This system gave the telephone operators access to referendum information on their computer screen, replacing the time-consuming paper shuffling that was used in the past. The electronic system was updated on a regular basis during the referendum period.

In addition to the enquiries answered by the temporarily established call centres, AEC divisional offices answered just over 115 000 calls throughout the referendum period.

A telephone interpreting service to assist electors from non-English speaking backgrounds also operated during the 1999 referendum.

The service had 15 language specific telephone lines and one line for electors who did not speak any of the 15 specific languages available. A caller to one of the 15 language specific lines was greeted by a recorded electoral message in their own language and if they required further information they could choose to be connected to an AEC officer with an interpreter on line.

During the referendum period, a total of 10 098 calls were made to the interpreting service with nearly 40 per cent of these callers choosing to speak further to an operator. The language lines that received the most calls during the period were the Cantonese, Mandarin and Vietnamese lines. The graph below illustrates the number of calls each of the language lines received during the 1999 referendum.

The interpreting service, which was first established for the 1997 Constitutional Convention election, has proven to be a very effective means of ensuring that people from non-English speaking backgrounds, especially those with limited English language ability, have access to electoral information.

The AEC internet website at www.aec.gov.au has played an increasingly important and comprehensive role in disseminating electoral information since it was first launched prior to the 1996 federal election.

The internet played an especially important role during the 1999 referendum as it was the official means of providing the results of the referendum. To speed up the access to referendum information, the AEC established a separate web address at referendum.aec.gov.au which housed the virtual tally room and other referendum specific information. This referendum address operated from 13 September 1999, and was accessible and integrated with the AEC general website.

The website contained extensive referendum information and was continually updated throughout the period. The referendum materials available included the:

Over the referendum period, over 166 200 users accessed the AEC's two web addresses downloading 509 100 page views. The site proved to be very popular internationally with over 25 per cent of users accessing the site from overseas.

The AEC's public information campaign included a number of activities directed at key target groups disadvantaged in their access to information about the referendum. These activities were aimed at minimising any language, cultural, physical or distance barriers these electors had to fully participating in the referendum.

A number of measures were undertaken to communicate with electors from non-English speaking backgrounds particularly those with limited English ability. The measures included advertisements translated into 25 languages placed in the ethnic media and the 15 language-specific lines on the telephone interpreting service. The Yes/No case pamphlet translated into 14 languages, was available on the AEC web site and also on request from the AEC. Key referendum information was also sent to ethnic media outlets, community organisations and groups throughout the referendum period.

The television advertisements explaining how to vote, which were translated into several languages, were played in 18 selected polling places on polling day. The selected polling places were in the New South Wales divisions of Prospect, Reid and Fowler, all of which had a high population of electors from non-English speaking backgrounds and past high informality rates.

A remote area information program was undertaken in the weeks leading up to referendum polling day. The program employed 29 Community Electoral Information Officers (CEIOs) to visit Aboriginal communities and organisations to inform indigenous electors of the referendum process and of polling arrangements and times. A poster and brochure outlining the referendum process were developed to support the CEIOs in their visits.

The CEIOs were employed in every State and the Northern Territory from early October up until polling day. Many of the CEIOs continued on from providing information to indigenous electors about the Aboriginal and Torres Strait Islander Commission election.

Radio advertising, translated into 20 indigenous languages, was broadcast in every phase of the national advertising campaign.

Electors with a disability

In the lead up to the 1999 referendum, the AEC contracted several disability organisations to provide assistance to meet the information needs of electors with a print disability in their preferred format.

Key referendum information, including the Yes and No cases, was produced in the following alternative formats: audio cassette; ASCII disc; braille; and large print. The cassettes and computer discs were distributed to disability organisations and agencies, libraries and individuals and were available along with the other two formats on request from the AEC.

There was high demand for these alternative formats, with extra copies of all the formats being produced to meet the additional requests. The table below details the number of each format that was produced for the 1999 referendum.

To address the needs of deaf and hearing impaired electors, all AEC television commercials were closed captioned and Telephone Typewriter (TTY) facilities were available in central office and every State and Territory head office.

In the lead up to the 1999 referendum, the AEC undertook a number of education activities to further the knowledge of the referendum process among school students and community groups.

The Electoral Education Centres (EEC) in Canberra, Melbourne, Perth and Adelaide conducted referendum information sessions with visiting school and community groups. Thousands of school students who visited the centres in the months leading up to the referendum actually participated in a mock referendum. One of the school referendums conducted in the Melbourne EEC was filmed by the ABC schools current affairs program Behind the News.

The federal government funded two different information campaigns to inform Australians about the key constitutional issues that they were voting on at the 1999 referendum.

The government conducted a neutral public education program that detailed the proposed republic model, the existing constitutional arrangements, the role of State constitutions and the referendum process. This program was conducted leading up to the referendum.

National advertising campaigns for and against the republic

The government appointed 'Yes' and 'No' committees to conduct national advertising campaigns to promote the arguments for and against the proposed republic model. Each committee was allocated up to $7.5 million, with the members drawn from delegates of the 1998 Constitutional Convention. The advertising campaigns were run in the weeks before polling day.