The only non-Australian citizens who are eligible to vote are British subjects who were on the Commonwealth electoral roll immediately before 26 January 1984, at which time the eligibility requirements were altered.

The following Australians are not entitled to enrol and vote:

Some people qualify for special enrolment which provides them with services to meet their particular needs. These include:

Enrolment forms are available at all post offices and agencies, AEC offices or can be downloaded from the AEC website. The forms may be returned to the AEC by post, fax or in person.

Australian citizens who are overseas and not enrolled, but would be eligible if they were in Australia, and who:

are able to enrol on a special enrolment form called 'Enrolment from outside Australia'. This form is available from Australian embassies and consulates and on the AEC website.

At a referendum there are seven days from the issue of the writ for people to ensure that they are correctly enrolled before the electoral roll is closed.

At the 1999 referendum, a large number of Australians used the close of rolls week to either enrol for the first time or to check their enrolment details and if necessary to update these details. The AEC answered over 146 341 enquiries through the national telephone enquiry service and processed over 315 000 enrolment forms during this week.

There were 12 361 694 people enrolled on the Commonwealth electoral roll at the close of rolls for the 1999 referendum. This figure was calculated following the processing of all enrolment cards received by 8pm on Friday 8 October 1999. The actual number of electors eligible to vote on polling day is calculated by adjusting the close of rolls figure with subsequent amendments such as the death of an elector prior to polling day, a provisionally enrolled elector turning 18 by polling day, or the reinstatement of an eligible elector previously removed from the roll. On the referendum polling day, the adjusted national enrolment figure was 12 392 040 electors eligible to vote. The State and Territory summary of enrolment and the divisional enrolment figures are available in the statistics section.

The number of electors who had special enrolment is presented in the bar chart below. 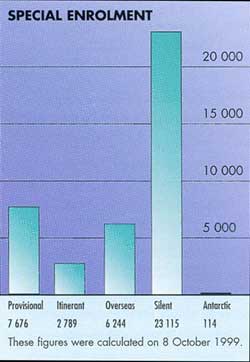 After the close of rolls, extracts of data from the computerised roll management system were used to produce certified lists of electors, reference rolls and microfiche.

The certified list is the official electoral roll used on polling day to mark off electors' names. Each polling place was supplied with a copy of the certified list of electors for the division it was located in. The list contained the name and address of electors with two black arrow head markings (clockmarks) about a centimetre apart beside the name of each elector. At each polling place the polling official drew a line between the arrow heads indicating that an elector had been given the ballot papers.

Reference rolls were also produced following the close of rolls for the referendum. They contained the same information as certified lists (without the clockmarks) and were produced specifically as reference material.

The electoral roll was also produced on microfiche and was available for public inspection at all AEC offices.