The scrutiny of all returned Senate ballot papers is conducted at the Central Senate Scrutiny (CSS) in each state or territory.

The Australian Senate count is among the world’s most complex upper house counts. There are a number of security measures and checks in place at every step of the process. Every Senate ballot paper, and every preference marked by a voter, is manually keyed in and checked by a human operator - with party-appointed scrutineers able to observe this process.

Once the millions of preferences marked on Senate ballot papers are manually entered and verified by AEC staff, the task of distributing those preferences is necessarily performed by AEC created and owned, and independently certified, software. This method of distributing Senate preferences allows Senators to be elected in time to take their seats in Parliament and has been successfully applied for previous federal elections.

Each election, detailed reports of the Senate distribution of preferences are made publicly available for further manual scrutiny, both internal and external, confirming the accuracy of the process undertaken. 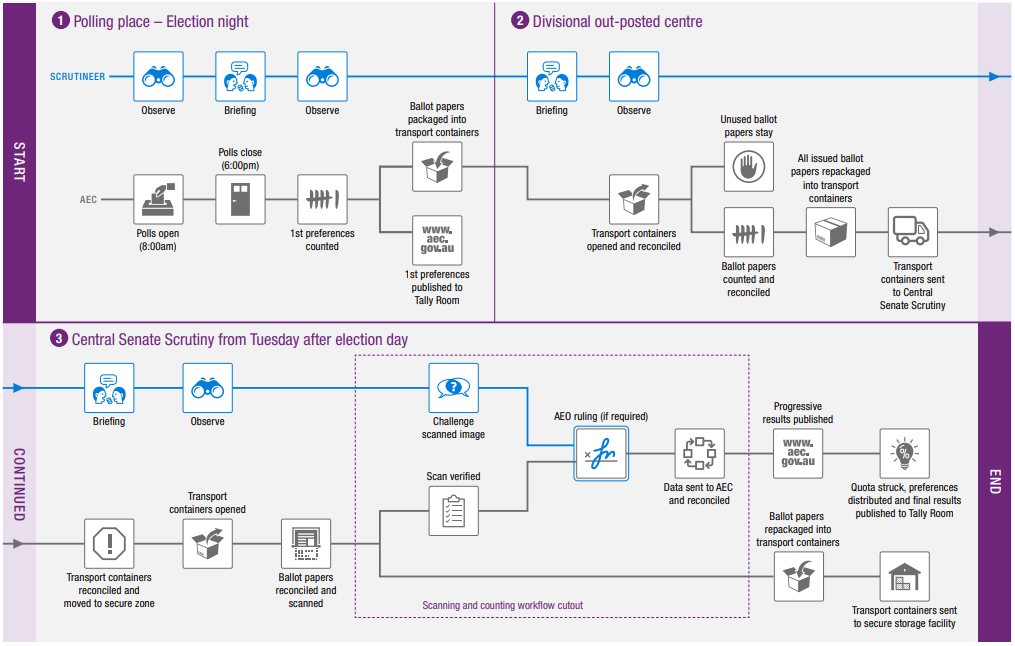 The ballot paper workflow contains multiple layers of checking to ensure preferences captured are exactly as recorded on the ballot papers. These are outlined below. 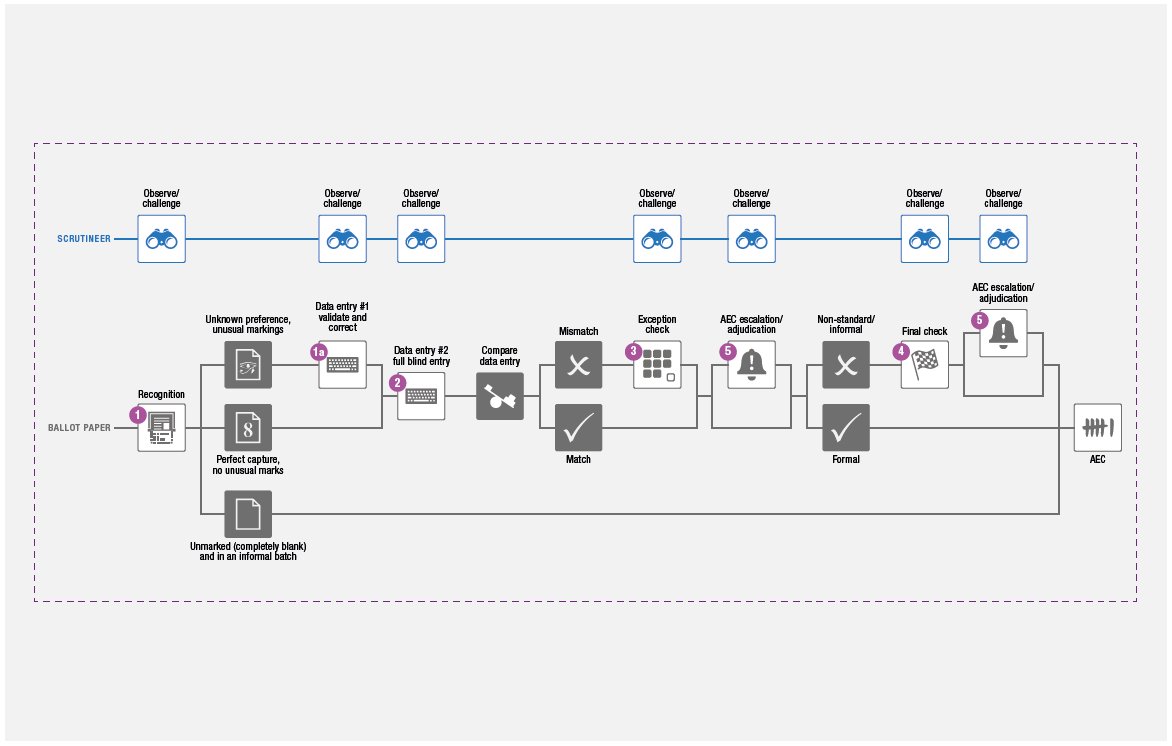 At all workstations where there are decisions being made (3, 4 and 5) there are larger monitors to improve visibility for scrutineers.

After each electoral event the AEC completes an assessment of the event, including identifying areas for improvement. From this the systems used are upgraded and fully tested prior to the next election.

EasyCount – Senate (ECS), the Ballot Paper Reconciliation System (BPRS) and the Senate Scanning Solution (SSS) (currently supplied by Fujifilm) all go through testing. This includes unit testing (completed by the developers), function testing (to ensure all components of the system work) and User Acceptance Testing (UAT) to ensure the systems meets the defined requirements. Other, non-functional, testing includes capacity and penetration testing.

Once all systems are built and tested individually, they are tested simultaneously to show they integrate correctly.

Once all systems are shown to accurately work together, the AEC performs further testing of the Senate Scanning Solution in each state and validates the data and flows. After this process is completed, all states process at the same time to ensure the eight (one for each state and territory) production environments operate effectively at the same time.

After the close of nominations, and before polling day, Production Verification Testing ensures the scanners and templates for each ballot paper are correctly set up. Sample ballot papers are used with the resulting data sent from Fujifilm to the AEC, to again test the entire production environment before scanning of senate ballot papers commences, in the days following polling day.

How long does the Senate count take?

The Senate count is more complex than the count for the House of Representatives and takes longer to complete. This is because it involves the election of multiple members for each state and territory, which means that candidates must receive a quota or proportion of votes to be elected rather than a simple majority.

Before a quota can be determined all Senate ballot papers need to be assessed for formality, so while counting of first preferences begins on election night, the full count cannot be completed until all ballot papers are assessed, which can be up to five weeks after the election.

Scrutineers are able to monitor the processing of Senate ballot papers at CSS centres in each state and territory capital city.

To accommodate scrutineers and provide greater visibility of ballot papers in decision queues larger monitors will be provided. Candidates are entitled to appoint one scrutineer for each AEC officer involved in the central Senate scrutiny. Fujifilm staff are not AEC officers and therefore do not count towards determining the number of scrutineers allowed.

The CSS sites operate after election day and are located at Fujifilm premises. While scrutineers will have full access to the areas of the site related to the senate scrutiny, they will not have access to areas of the site unrelated to senate processing. Fujifilm requires all visitors to their facilities to adhere to safety requirements.