The table below shows on a national level how electors voted at the 1999 referendum: 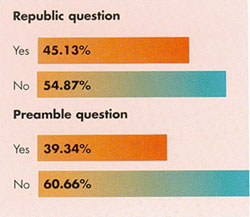 It was evident from the counting completed on referendum night alone, that the two proposed constitutional changes would fail to gain the required double majority.

The only change to the trend of results available on referendum night occurred in Victoria. On referendum night it appeared that the republic question might have achieved a majority 'yes' vote in Victoria. However, once the counting had been finalised Victoria joined the other States and the Northern Territory in recording a majority 'no' vote on the republic question.

Only the Australian Capital Territory recorded a majority 'yes' vote for the republic question.

The preamble question did not gain a majority 'yes' vote in any State or Territory.

Nationally, 95.1 per cent of eligible electors voted in the 1999 referendum.

The Australian Electoral Officer for each State and Territory produced a written statement showing the referendum results for their particular State or Territory. These statements certified the number of 'yes' votes, 'no' votes and informal votes for both of the proposed constitutional changes.

These eight statements were provided to the Electoral Commissioner on 24 and 25 November 1999.

Return of the writs

After receiving the statements of results, the Electoral Commissioner endorsed on the two writs the number of 'yes', 'no' and informal votes for Australia and for each State and Territory.

The two writs for the 1999 referendum were returned to the Governor-General on 30 November 1999.