AEC encouraging voters to “stop and consider” this federal election

The Australian Electoral Commission (AEC) commenced a social media advertising campaign today encouraging voters to carefully check the source of electoral communication they see or hear over the course of this coming federal election. 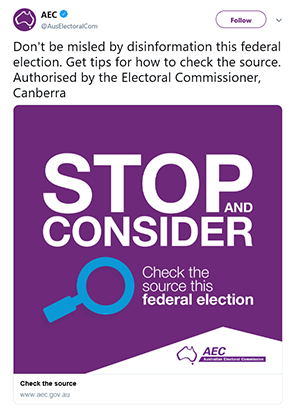 The Electoral Commissioner, Mr Tom Rogers, said the Stop and Consider initiative – which involves AEC advertising on platforms such as Facebook, Twitter and Instagram – is not in any way seeking to make the AEC the “umpire” of political debate or arbiter of electoral truth through this election.

“Under the Commonwealth Electoral Act 1918, there are no provisions relating to truth in electoral communication in respect of political claims and counter claims, and the AEC has no legislative power in this area. Australian voters have the freedom and right to express a political opinion or critique an election policy, either in-person or via social media,” Mr Rogers said.

“The key official source for voters to know what they have to do to participate successfully at this federal election is the AEC, via its website and a comprehensive multi-media public information campaign which will run widely until election day.”

Mr Rogers added that, thus far, there was no serious evidence of people or organisations seeking to disrupt Australian elections through disinformation, but given apparent events in other parts of the world, it was prudent to be vigilant.

Email your media enquiry to the AEC Media Unit at media@aec.gov.au.